Established in 1991, Bokaro in Jharkhand, is a major industrial centre of India located in the eastern region of the country and coordinates 23.29°North latitude of and 86.09°East longitude. Bokaro is located on the southern bank of Damodar river . The Steel City is surrounded by hilly mountains and river valleys. The river is an important source of water for the industries and new townships which are located along the banks of the river. On the north, the city is enfolded by the high ranges of Parasnath hills and Satanpura hillocks, creating a panoramic landscape to view. 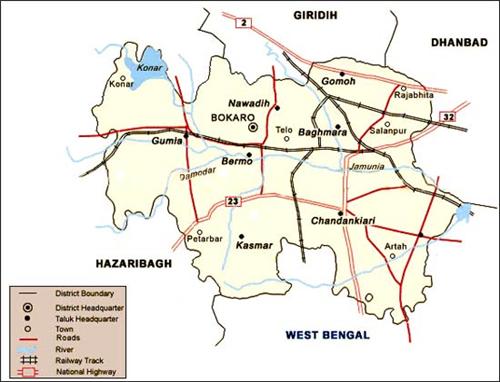 Bokaro has a large steel plant managed by Steel Authority of India (SAIL) and other medium and small-scale industries. Geographically the district is divided into following physical features – Lower plateau, Central plateau and Damodar river, Ganga river and Tenughat valley. The district covers a geographical area of 2861 sq. km. with an average altitude of 210 metres above the sea level.

The rivers that flow through Bokaro is an important source of water in the city with respect to the industries and townships located along the banks of the river. Damodar River, the major river flowing through the city has one of its tributaries meandering along the southern and eastern bounds of the city. 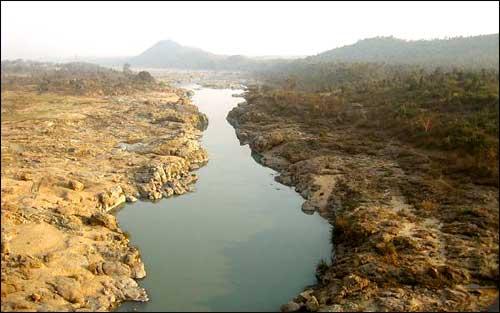 Damodar River, also called Damuda in Jharkhand, passes through Indian states of West Bengal and Jharkhand. The river is rich in mineral resources and the valley is home to large-scale mining and industrial activity. Because of its ravaging floods in the plains of West Bengal, the river was earlier known as Sorrow of Bengal. But with the construction of several dams, the flow of the river and its tributaries are checked from time to time to avoid any floods. Originating from Chandwa on the Chhota Nagpur Plateau, the river flows eastward for about 592 kilometres through the states of Jharkhand and West Bengal to the estuary of the Hooghly River. Barakar River is the most important tributary of Damodar River.


Some tributaries of Damodar River:

Barakar River: Originating near Padma Barakar river flows for 225 kilometres across the northern part of Chota Nagpur Plateau finally meeting Damodar River near Dishergarh in West Bengal. It has a catchment area of 6,159 sq. km. The river passes through northern portion of Parasnath Hills.

Konar River: A tributary of Damodar, it makes its apperance near Sultana village on the Hazaribagh-Chatra road, and flows through Hazaribagh to meet Bokaro River, another tributary, and finally meeting Damodar near Jaridih Bazaar in Bokaro. The barrage is build across the river at the point of its confluence with the Bokaro River to serve Bokaro Thermal Power Station.

Bokaro River: The river flows through Bokaro and Hazaribagh, originating from Hazaribagh plateau and changing its course to flow to the southern region of narrow valley between Jilinga and Langu Hills. It passes through the East and West Bokaro Coalfields , flowing in Konar River and finally meeting Damodar.

There is a barrage across the Konar River at the point of its confluence with the Bokaro River to serve Bokaro Thermal Power Station. There are also an artificial lake in City Park and a lake located 40 kilometres from the city in Topchanchi.

The Bokaro district falls in the tropic monsoon region and hence, enjoys a tropical climate. The main seasons in this region are winter, summer and monsoons. Winters are dry and cold with a maximum temperature of around 28°C and a minimum temperature of 4°C to 6°C. The summers have a hot and humid climate where the maximum temperature reaches upto 42°C and above. Heavy showers mark the monsoons with an average rainfall from 157 cm to 195 cm and with this season in, the temperature drop to pleasant levels.The ideal time to visit Bokaro is from September to March.


Bokaro At A Glance